The Wonder of Colostrum 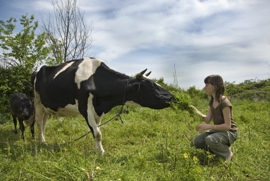 The evidence is out...

colostrum is a healthy support for proper function of our body.  It is shown to strengthen the immune system and aid in cell regeneration.

3.  Bovine colostrum aids in the recovery from injury by raising the proline-rich polypeptides (PRP), which is vital for healthy organ tissue, and improvement in the elasticity of our skin.

4. Colostrum has naturally occurring bone and cartilage growth factors that increase the utilization of minerals and glucosamine in our body.

5. Bovine colostrum contains a high concentration of IgG-type immunoglobulin. IgG antibodies are important in fighting bacterial and viral infections. IgG antibodies are the only type of antibody that can cross the placenta in a pregnant woman to help protect her baby.

Soon after giving birth, female mammals produce colostrum, which is a super food substance that jump-starts a newborn's immune system. Colostrum is NOT milk. Research shows that the benefit of this substance does not end in the first 48 hours of life.  Testing results show that colostrum may be able to jump start a compromised immune system against infection and/or immune related chronic disease.

The immune-boosting properties of colostrum stem from molecules called transfer factors or;  TFs.   The TFs can educate or modulate a recipient's immune system, teaching it to recognize specific antigens and communicate when they are present.

The quality of the product is based on the process of harvesting and stabilization. Oral delivery method is critical because we have thousands of receptors in our mouth. These receptors prepare the body for what is coming. There are 2,200 components that make up colostrum.  Poor quality and delivery of colostrum can render it of little to no value. The digestive process will destroy much of the components in capsule form.

Be Aware: The FDA allows any product to be called colostrum that has been harvested within 72 hours. Most of these late harvests would largely be milk, NOT colostrum.

Newborn babies do not have a swallow reflex when they first begin to breast feed,  so mother’s milk is absorbed through receptors in the mouth. There was a study done with babies where 50% were breast-fed, and 50% formula-fed.  A random 50% of each group were also fed colostrum. The children who received colostrum had far fewer illnesses, and had far greater cognitive abilities in standardized tests than those who didn’t have the added colostrum, regardless of whether or not they were breast fed.

Breast fed babies receive colostrum from their mothers milk along with  glyconutrients for a beautiful strong beginning to life.

All of the supportive scientific studies we found use an oral delivery method.

Look for a lozenge that dissolves in the mouth.

Colostrum is an important building block for wellness!